Triangular units are numerous at 97 Kings. The structural stability of that shape and design is one to applaud. A triangle is the simplest figure that will not change shape when the lengths of the sides are fixed. Our trusses are becoming a community of triangles. 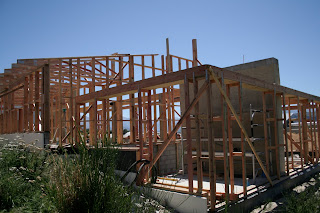 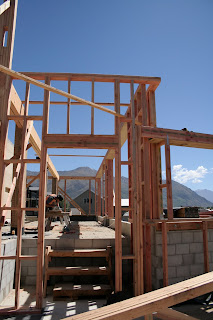 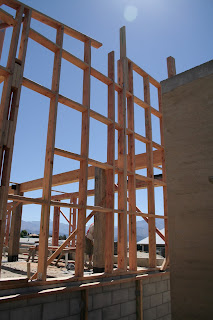 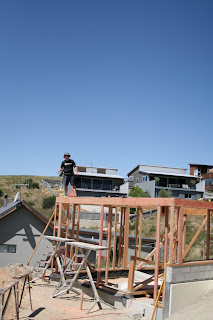 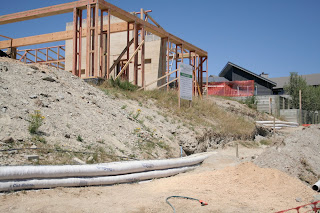 Today's blog highlights Pablo Neruda (1904-1973), who was a Chilean Poet and awarded the Nobel Prize for Literature in 1971. He is the most widely read South American poet and Pablo throughout his life favored books which make you think the most. "The hardest way of learning is that of easy reading; but a great book that comes from a great thinker is a ship of thought, deep freighted with truth and beauty."
Neruda wrote a nature poem called: Triangles.
The 33 line poem talks about the trembling triangles of migratory birds- fantastic, powerful ideas are offered about their wings which frantically flap and how in triangles, these iron birds, cross over enormous oceans.
Tucked away in the timber of our ecoBuild were the iron birds of the day's construction. The middle row of photos gives one awesome views and we catch sight of Johnny, on the saw; JJ doing a measurement in the future-kitchen-zone; and Doug in full perch on top of the ensuite's study. In the 'Johnny' photo, one can see how all the beams are up and create an extensive rectangular crown over the 'great room' of the home.
The bottom left photo shows the continuation of the earth-bag building. This wall grew 160mm taller today! However, tomorrow- it will launch further out of its low profile nest as a mixer arrives on the scene. Also, 4 truck loads of Cardrona earth arrived this morning and now the "immovable spiral" will gather height and strength. Final word is that the earth-fills are 'no match' to the invincible triangles!
Posted by diana at 24.1.11